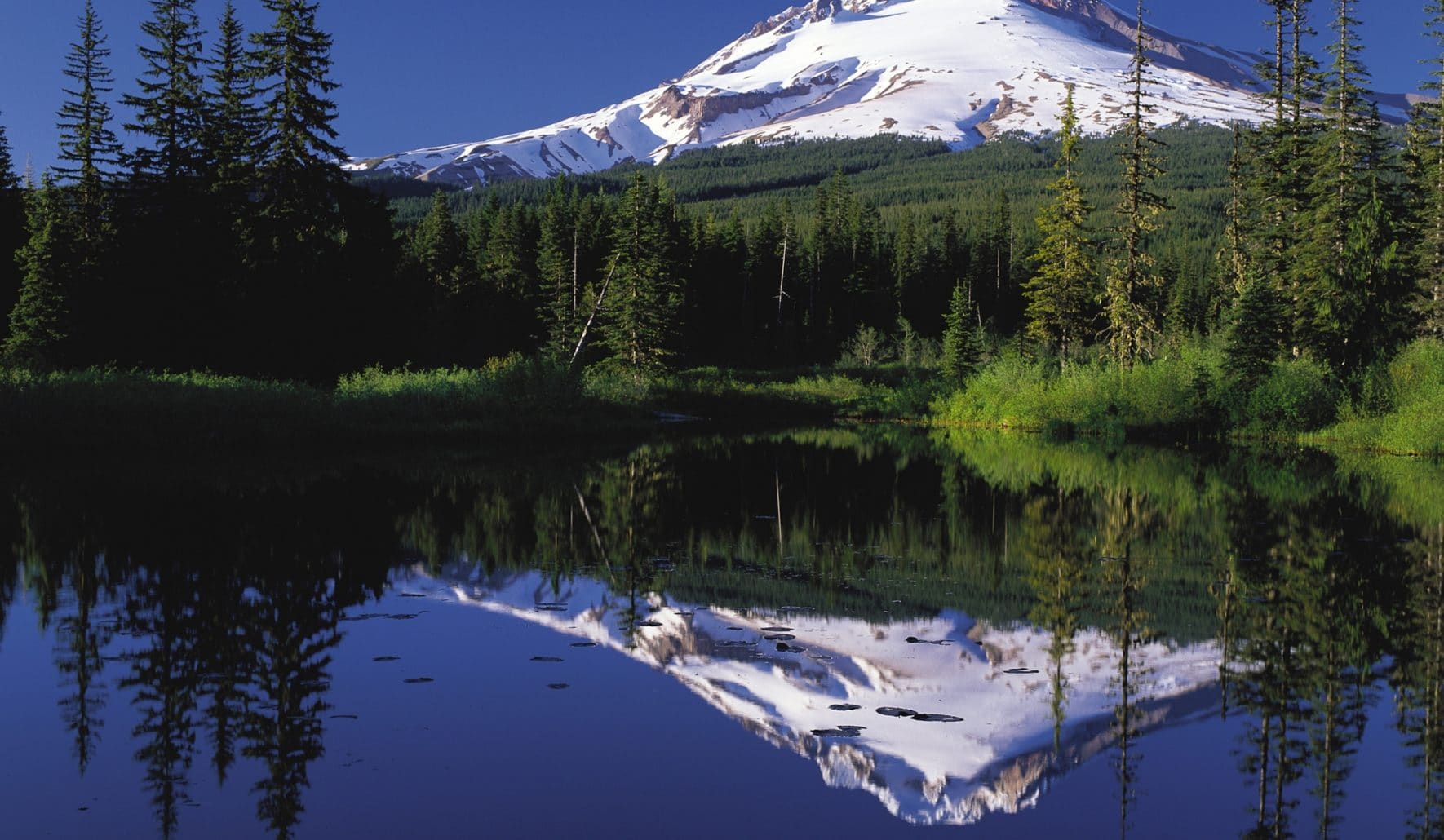 Quest had the opportunity to meet with Lynn Gates, Senior System Project Analyst at Clackamas County to talk about their recent Fluid Candidate Gateway implementation.

Clackamas County is a county in Oregon that has approximately 2,200 employees, plus another 300 retirees. They are currently on PeopleSoft 9.2 for both Financials and HCM and use PeopleTools 8.55 for HCM and 8.54 for Financials.
Quest had the opportunity to meet with Lynn Gates, Senior System Project Analyst at Clackamas County to talk about their recent Fluid Candidate Gateway implementation.

What were your drivers for moving to fluid candidate gateway?

Clackamas County began the migration to Fluid in January 2015. Since that time, the County has been implementing Fluid as ‘new’ features and functionality are released. As the bulk of the users are job seekers and employees, the County wanted to provide a more user-friendly experience to those users. Also, as job seekers and employees are using mobile devices, the County needed the ability to provide them an easy and efficient method to view job openings and apply anytime from anywhere.

What was the timeline for deploying on the technical and functional side?

What was your testing process in deploying fluid candidate gateway? How did testing go?

The County’s Workforce Data Management team—one manager and two business analysts—completed most of the end-user and acceptance testing. The team followed the County’s existing test scripts and tweaked them as the team went along to incorporate the differences with Fluid. Overall testing went rather well. There were no major issues with delivered functionality. During testing, the County noted a few customizations—Conviction Disclosure and Accommodations—that were still required and needed those features added back. These changes lead to some re-testing. It was also the County’s first time rolling out Careers for Employee Self-Service so the County spent a lot of time testing this as well.

Did you have to make any changes to your current recruitment templates?

As a business practice, a new resume and recruitment templates do not need to be recreated for a move to Fluid. But the County found their old templates needed to be updated to remove the old cut and paste resume option that is no longer needed in Fluid and wanted to add a few customizations back to the application.

For the obstacles you mentioned, were there easy fixes?

Some obstacles were not necessarily system related but rather involved getting consensus and feedback from other parties in a timely manner. Functional items the County could address rather easily but the requirement for Conviction Disclosure and Accommodations came late in the game. As these customizations needed to be added back prior to go-live and with a short timeframe for completion, there was originally some concern that the team would not meet their go-live date. The team got these changes completed and go-live was not delayed.

How did you roll out fluid candidate gateway to your applicants?

The County put a “Coming Soon” announcement on the County’s Careers page ahead of time alerting users that changes to the County’s job search were coming and highlighted some of the benefits. The County also put a maintenance message on the County’s Jobs page at least a week in advance so job seekers were aware the County’s site would be unavailable. The job openings were closed by May 30, 2017. The upgrade began on the evening of May 31, 2017, starting with a PeopleTools update, upgrading to PeopleTools 8.55.15. Once the PeopleTools update was complete, the project to implement Fluid Candidate Gateway was completed. All in all, Candidate Gateway was live by noon June 1, 2017. The first job openings were posted on June 5, 2017.

Additionally, the County also made some updates to the County’s Careers page to give it a more modern look and feel. The County added a separate tile on the County’s Jobs page to help direct current employees to self-service as opposed to the external careers site. 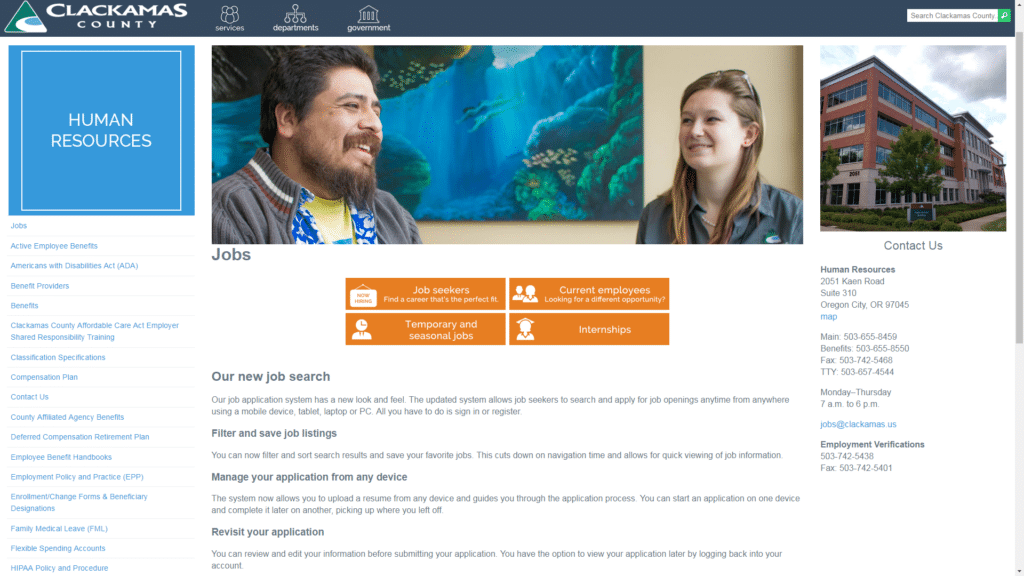 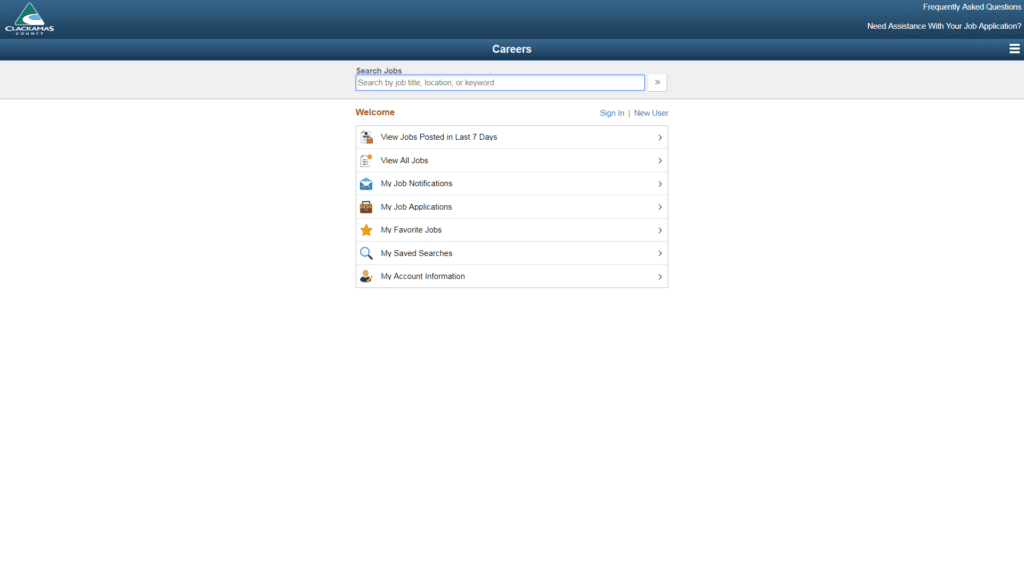 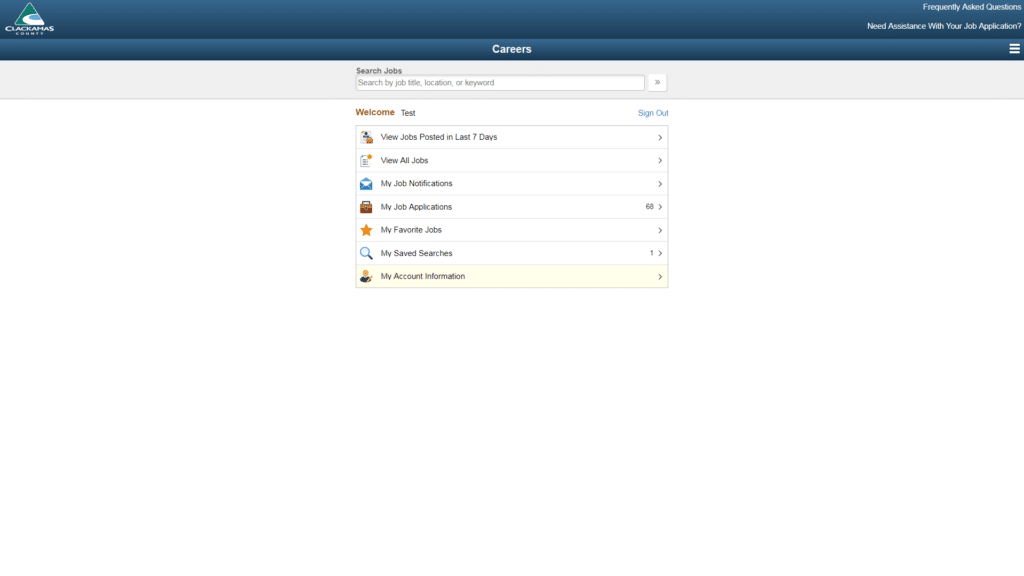 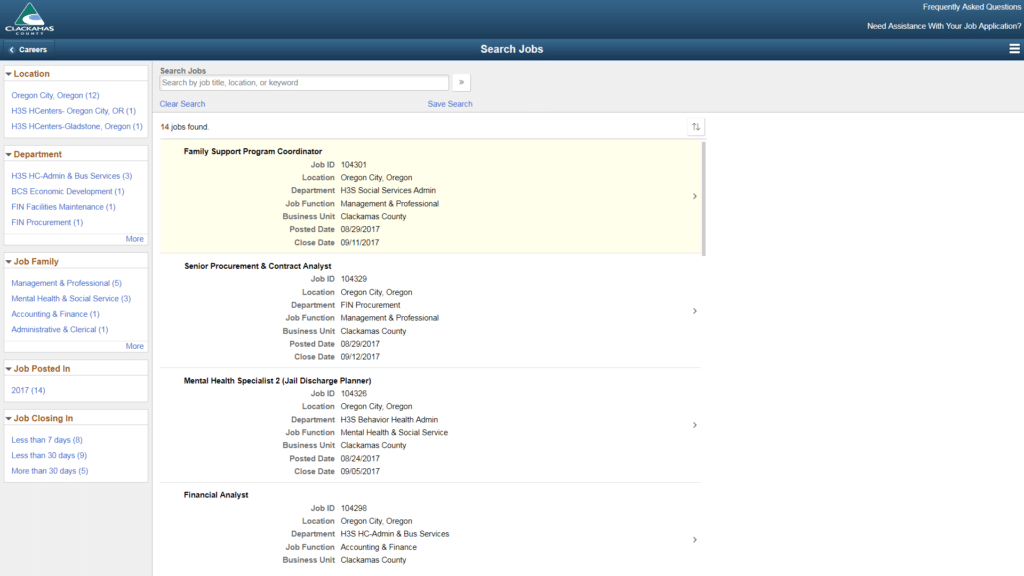 What has been the reaction from your candidates?

The County has been live with Fluid for almost three months. Questions and concerns from candidates have been minimal.

Prior to Fluid Candidate Gateway, the team would receive one to two emails a day about issues with applications. Since implementing Fluid Candidate Gateway, the team only gets about one to two emails a month. The ability to upload resumes and cover letters also reduced issues that were occurring with copy and pasting. The issues being received now are about password resets or account access.

Initially, there were a few applicants who encountered error messages such as “You’re not authorized,” but these were easily resolved by having them clear their browser cache. The County put a message on the County’s Jobs page, after go-live, instructing applicants to do this.

From the County’s perspective, the formula for Fluid is little feedback plus few questions and no complaints from candidates equal success!

What benefits have you seen for your candidates?

Fluid functions much better on mobile devices and allows them to easily search and apply for jobs. The ability to attach a resume and cover letter is a definite improvement. Job seekers are also able to attach veteran’s documents (DD214) and any supplemental materials listed in the job posting. The modern look and feel to the external Jobs page directs them to various documentation related to the application process.

Have you seen any significant differences in your applicant pool?

The enablement of Fluid Candidate Gateway is still in the early stages so the County does not have much data yet on differences. The County hopes with the ease of applying and ability to upload resumes, cover letters and supplemental materials we will get more applications submitted faster.

Have you made any customizations to the delivered functionality? If so, what?

The County carried forward a few customizations to the online application related to conviction disclosure and accommodation requests. The County also customized the Review/Submit Application to include these new sections along with a section for the questions and answers from the Online Questionnaire.

What new features were enabled for your candidates?

For frequent job seekers, the Jobs Posted in Last nn Days was implemented. Also, the County wanted to show the Job Opening Closing Date. This feature was delivered in Image 22 and has been enabled. The advanced search features (Jobs Closing in nn Days) on the Job Openings page was also enabled.

What enhancements or changes would you like to see in future images?

What are features being considered for the future? 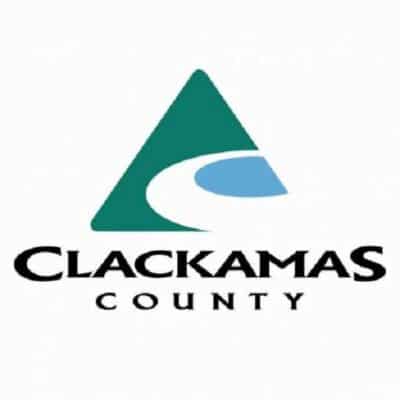