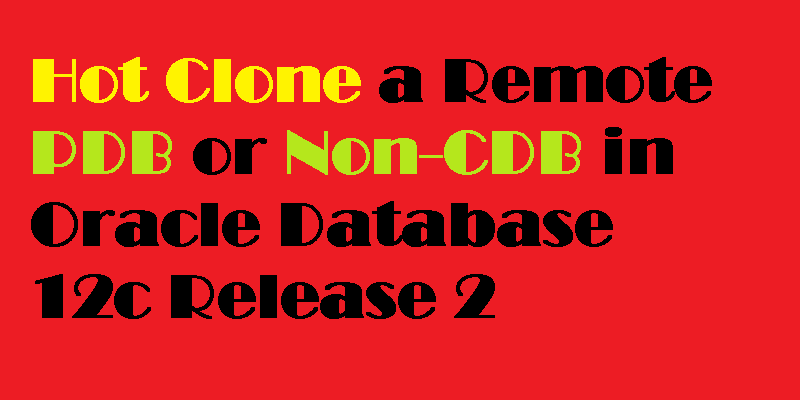 There are several methods used and developed over the years/decades since the Oracle Database has been around to migrate or clone your databases. Most of the methods have required us to use Data Guard or GoldenGate to achieve the same with minimal downtime or RMAN Backup files/Database Datafiles for regular cloning.

With the 12cR1 version of the database, remote cloning was introduced but still required to place the source non-CDB or PDB into Read-Only mode before initiating the cloning. With 12cR2, one has the ability to clone a database (also known as hot-cloning) without the restriction of read-only or downtime on the source. Also, hot-cloning can be achieved without an existing backup of the source.

Use Cases for Hot-Cloning a Database

Remember, we are only mentioning “hot”

Note: even if you grant SYSDBA, but it is not enough, still need SYSOPER.

If you use an alias for the database link in a RAC environment, the same
tnsnames.ora entry should be added on all RAC instances.

Verify that you are able to connect to the Remote/Source Database from the Target Database.
SQL> select * from [email protected]_DB_Alias;

A hot clone can be taken while the source is still open read-write i.e without interrupting any operations in the source.

A hot clone is known as a “fuzzy read” of all the blocks in the datafiles of the source.

All of this is performed atomically in the clone operation, with no human intervention when the clone / create pluggable database command is executed.

At the Target CDB (If using ASM at the Target – this is the default on Oracle Cloud) ensure the Initialization Parameter for the Destination File Directories in ASM is set:

For example: DB_CREATE_FILE_DEST=’+DATA’ (For non-ASM Target DBs, we need to use the FILE_NAME_CONVERT in the CREATE PLUGGABLE DATABASE command)

(The files will be created by default into the CREATE_FILE_DEST destination directory)
When cloning a PDB in DBAAS environment with TDE Encrypted Data, the default wallet password is system user password which is given during DB creation.

The cloning command above can take anything from minutes to days depending on the network connectivity between source and target servers, and the size of the database. The above process for the author of this paper took 4 hours for a 6TB Source Database.

If the target PDB was created as a clone of a non-CDB, run the following commands to let the database be now a pluggable database:

Check PDB_PLUG_IN_VIOLATIONS on target database for any error.

Resolve the errors (if any) on the new Target Cloned PDB, and your clone is complete.

The cloning operation for production PDBs can take minutes to hours as mentioned above. If there is a need for frequent clones, then the process of larger database systems can be a long time-consuming activity even in the case of hot-clones.

A refreshable clone PDB solves the above problem. There are two types of Refreshable Cloned PDBs you can create:

The REFRESH MODE clause is provided in the CREATE PLUGGABLE DATABASE … FROM statement which was used above:

A refreshable clone PDB must be in either of the following states:

A refreshable clone PDB can be converted into an ordinary PDB by running the command:

An ordinary PDB cannot be converted into a refreshable clone PDB – that is the process is irreversible.

Sushil Motwani has about 25+ years of experience as an Oracle SME, with hands-on experience on the complete Red Stack of Oracle, from Hardware to Software and the Oracle IaaS/PaaS Cloud.

He is a thought leader having published training material for Oracle University, published and presented on multiple occasions at events such as Collaborate (Oracle Applications User Group), Oracle Open World, Oracle Health Sciences Conference in Denver, Atlanta, New York, Las Vegas, Rome, Monte Carlo and multiple locations across New England. He is actively involved with the OAUG and IOUG groups and presented at a number of SIGs (Special Interest Groups) as part of these user groups.

He has a Computer Science Engineering Degree from the University of Bombay. Over the last few years, before joining SmartDog Services, Sushil has lead Oracle and Microsoft teams to proactively deliver to their customer’s technical roadmaps and provide newer/better solutions to improve technical delivery in the long run. At Oracle, Sushil worked with Advanced Customer Services for 6+ years leading some of Oracle’s largest premier customers as a Technical Account Manager. Sushil has also worked as a Director of the DBA Practice for a well-known Managed Services Provider in the Boston area from 2007 to 2009. From 2001 to 2007, Sushil worked at Harvard University as their Oracle and Microsoft SME and lead multiple technical implementations as part of their central IT team.