As part of PeopleSoft Industry Day 2019, representatives from Kaiser Permanente spoke about how the company successfully completed a “quad play” upgrade in 2018 for their single-instance finance and supply chain PeopleSoft ERP supporting 250,000 users.

Kaiser Permanente is the nation’s largest integrated health care delivery system, which serves over 12.2 million members or patients. The company brings in $80 billion of not-for-profit revenue with 39 large medical centers and 694 medical offices. There are over 217,000 employees – including 22,900 physicians and over 59,000 nurses.

After Kaiser Permanente successfully completed the “quad play” upgrade, they decided to share the route that they took with similar and smaller companies – hoping that it would inspire them to do the same.

Kaiser Permanente has a single-instance database that serves just under 250,000 users. The company is on PeopleSoft FSCM 9.2 and has a Finance Data Warehouse (FDW) and several edge applications like Vertex for taxes, iPhone applications, handhelds for inventory management, demand planning, etc. They are on PeopleTools 8.56.

Kaiser Permanente’s finance and supply chain are the lifelines of the organization. There are 600+ integration points to about 100+ systems within the organization, like HR, Payroll, Pharmacy, etc.

As of 2018, Kaiser Permanente is doing nearly $25 billion in AP transactions and around $10 million total transactions. To keep all of those integration points and interfaces running and to make sure that they provide the right product at the right time for patient care critical items, they have about 900,000 jobs processing manually per month. 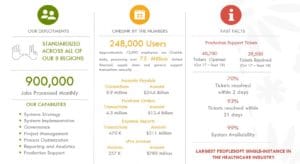 The context setting here is that the finance and supply chain system is extremely critical for 250,000 users for an $80 billion organization. Considering the stakes, when Kaiser decides to do an upgrade, there is very little room for error.

Around March 2018, the Kaiser Permanente leadership team tasked the team with doing multiple upgrades at once. So, in October 2018, the company completed the “quad play” upgrade – upgrading PeopleTools, PUM Image, and database all at once while also adopting the Fluid framework. The image below shows both the scope and plan for the “quad play” upgrade.

Scope of the “Quad Play” Upgrade

The “quad play” upgrade project entailed upgrading database and Golden Gate, PeopleTools, PUM Images, and adopting the Fluid framework. When establishing the scope of this project, Kaiser identified several measurements of success, which are laid out in the image below. The team also identified all of the benefits of taking a big bang approach instead of a phased approach.

By the end of the project, things had gone fairly smooth, so the team decided to add in the additional simultaneous upgrades for KoFax/OCR database and TWS. The team felt that it was important to be flexible when they felt that additional scope was needed.

Plan for the “Quad Play” Upgrade

The project started in March, and deployment was scheduled for September 17, 2018. After the project was defined, they began the next stages of building and testing. Right before deployment, Kaiser Permanente went through two dress rehearsals to ensure a smooth deployment.

The image below shows the timeline of the phases of the project, checkpoints, and several risks that Kaiser Permanente identified within this project. The team advised having a Plan B in place in case things aren’t going as planned when you reach your checkpoints.

They knew that they had to get the database up and running after upgrade by the start of April in order to move forward with the other upgrades. From there, they moved onto the Golden Gate upgrade, PeopleTools upgrade, and PUM Image upgrade. The final steps were the Fluid framework adoption and KoFax/OCR DB upgrade, along with the TWS upgrade.

The Decision to Adopt Fluid Framework

After several upgrades, user groups wanted to know what they were getting. Most users were actually meeting difficulty as they changed business processes. The Kaiser Permanente team spent time thinking critically about the potential for users and realized that only 10 percent of the information on the homepage actually applied to the user. They also discovered that there had been no display change in user experience in 10 years.

As users migrated to mobile devices, they were experiencing scaling issues, and navigation was difficult in the classic framework. Users had been trained to add to favorites, but their favorites menu became oversaturated quickly, defeating the purpose. These user issues became the driving factors for delivering a new experience to the user group.

While completing the project, Kaiser wanted to introduce Fluid framework. After careful consideration, they decided to deliver one homepage instead of multiple. The plan was to assign a tile to each module. However, there was one exception. The Grants Suite tile consisted of a combination of multiple modules in order to complete a transaction. This was a bundle of four features. In general, each tile would be based on one navigation collection. Within the collection, a user would have links to the pages. There would be an additional tile for common functionality features such as security and alerts. Other tiles to be introduced included an employee portal that is specific to the individual and a supplier portal for external suppliers.

As part of the project, the team decided not to introduce Fluid pages but instead gave the Fluid framework. In order to mimic Fluid life experiences, they partnered with their development team and turned heavily used Classic pages into Classic Plus pages. At deployment, they enabled the Classic Plus pages. Kaiser Permanente made the important note that there can be alignment issues when creating your own Classic Plus pages in lieu of those created by Oracle.

The advantages that resulted from this upgrade included:

A key benefit for Kaiser Permanente was that they minimized the number of clicks that a user had to take in order to accomplish a task. A member of their executive team commented that the old version versus the new was similar to the comparison of the original Blackberry to the modern iPhone.

Once deployed, Kaiser Permanente received both positive and negative feedback. The major issues experienced involved the browser cache, page scrolling, the Help Me Find feature, and My Personalization. To address these issues, Kaiser created a video explaining how to clear the cache. They also explained that the size of displays and fonts could be customized for individual monitors by zooming in or out. They made a quick reference guide for finding features. The personalization issue was caused by an Oracle bug, so they created a new route to achieve the same purpose until Oracle could fix the bug.

The image below illustrates some of the next steps that Kaiser Permanente is planning to take. 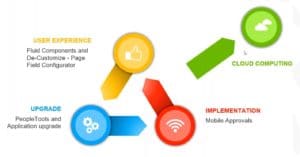 To learn more about Kaiser Permanente’s “quad play” upgrade and what else the company has accomplished, check out the additional Quest resources attached below.

COLLABORATE 20 will take place April 19-23, 2020 at the Mandala Bay Resort and Casino in Las Vegas, NV! Call for Presentations is now open. Don’t miss your chance to share your stories, insights, and advice with the Quest Oracle Community! Submit an abstract by October 11, 2019, to be considered to be a speaker at the conference.

If you’re looking for more JD Edwards content, join us next year at INFOCUS 20, the premier deep-dive JD Edwards focused event of the year! The event will take place August 25-27, 2020 in Denver, Colorado. Keep an eye out for more information on this event!